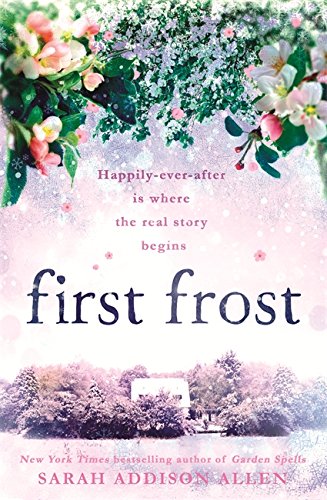 Autumn has finally arrived in the small town of Bascom, North Carolina, heralded by a strange old man appearing with a beaten-up suitcase. He has stories to tell, stories that could change the lives of the Waverley women forever. But the Waverleys have enough trouble on their hands. Quiet Claire Waverley has started a successful new venture, Waverley’s Candies, but it’s nothing like she thought it would be, and it’s slowly taking over her life. Claire’s wild sister Sydney, still trying to leave her past behind, is about to combust with her desire for another new beginning. And Sydney’s fifteen-year-old daughter Bay has given her heart away to the wrong boy and can’t get it back.

From the author of the New York Times bestselling sensation GARDEN SPELLS, FIRST FROST is magical and atmospheric, taking readers back into the lives of the gifted Waverley women – back to their strange garden and temperamental apple tree, back to their house with a personality of its own, back to the men who love them fiercely – proving that a happily-ever-after is never the real ending to a story. It’s where the real story begins.

Some books you read for the plot; you are desperate to find out what happens next and what happens after that, and how will it all end? But, some books you read to enter in to another world for a little bit and witness the peculiarities of the people who live there. That is what reading Sarah Addison Allen’s books are like for me, it’s like going on holiday and people watching from the local cafe’s window.

I adore the town of Bascom with it’s jumble of family histories and reputations, appreciation of food and it’s sensitivity to the magic of the seasons. After reading Garden Spells a couple of years ago it was lovely to come back and gaze through the window once more of the Waverley house. It was refreshing that the ‘happy ever afters’ were still in tact and that the drama did not revolve around the sister’s love life. Instead Claire and Sydney were battling with their next big dreams, Claire can’t work out what she wants from her business and Sydney is desperate for a new baby whilst also feeling a growing distance with her teenage daughter.

Saying that, there is still enough plot to keep the book going with high school fights, a mysterious stranger up to no good and a flighty young woman who is as wily as she is vulnerable all causing trouble for the Waverley sisters to deal with. But at it’s heart this was a most comforting read. I saw in an interview that Sarah Addison Allen wrote this just after battling cancer and wanted to return to safe ground in her writing, which is why she wrote a sequel. I was moved by that and I think her appreciation for the loved ones in your life and knowing where you belong comes through very strongly.

The writing once again feels like a soothing lullaby, reeling you into a comforting dreame land. And when I finished it, I put it on my shelf and thought  about how I would probably visit Bascom again in the summer, on a hot day, when Orla naps and I can spread a picnic blanket out in the garden and take my book and once more take a little holiday to the world of Sarah Addison Allen.